Jewelry store exhibition
Jewelry store
zengo.theme.szarvasmuzeum::addon.kiallitasok_back
Welcome to the Jewelry Store. Through the artifacts displayed here, we will guide you through the history of local jewelry. Throughout the journey, you will learn what kinds of jewelry were worn by the people of ancient times and how jewelry evolved as time progressed.

Entering the room, you will see the first display case on the left-hand side with prehistoric jewelry. In addition to simple amulets, you can also observe pieces made of sea shells and sea snail shells, providing indisputable evidence that long-distance trade existed as early as prehistoric times. Besides Bronze Age jewelry, there are also pintaderas exhibited in this showcase, which the Scythians used as stamps on their bodies or apparel, leaving various motifs on the skin and fabric. Some typical knobbed anklets used by the Iron Age Celts are also on display.

Towards the left hand, in the next showcase, you can see a selection of Migration Period jewelry, featuring double-sided bone combs from a Germanic tribe called the Gepids and wonderful gold jewelry from the Avars.

Located in the counter display case in front of the showcases, you can marvel at the jewelry of the Sarmatians from Roman times. The lively commercial relationship the Sarmatians maintained with the Romans can be very well traced in their jewelry. This case contains several original Roman pieces, as well as other adornments made in the Roman style. The most distinctive piece of jewelry of the era was the fibula, an ornately crafted clothespin holding together the Romanized toga-like clothes of its wearer. The Sarmatians used a great many pearls for necklaces and bracelets, and also adorned the borders of their clothes with pearls. We know that Sarmatian women wore pants because of the placement of the beads in their graves, which were crafted from glass paste and various stones, including amber.

The bracelet placed in the center of the room is related to the conquering Hungarians. Originally, it was a hinged strap bangle made in the Byzantine style. Due to its great value, the bracelet was probably already cut into pieces by the heirs of its first owner, so only these two chunks survived. The mythical animal figures and plant motifs decorating the bracelet were characteristic of pieces owned  by the highest-ranking conquerors.

Finally, nearing the entrance again around the room in the showcase next to the door, you can see some of the simple pieces from the Conquest Period as well as medieval Hungarian jewelry.

In addition to introducing certain ancient cosmetic practices, the boards on the wall will offer you a more comprehensive look at the connections between jewelry and social aspects and at the impact of the belief system that lay behind how people used to wear these pieces. 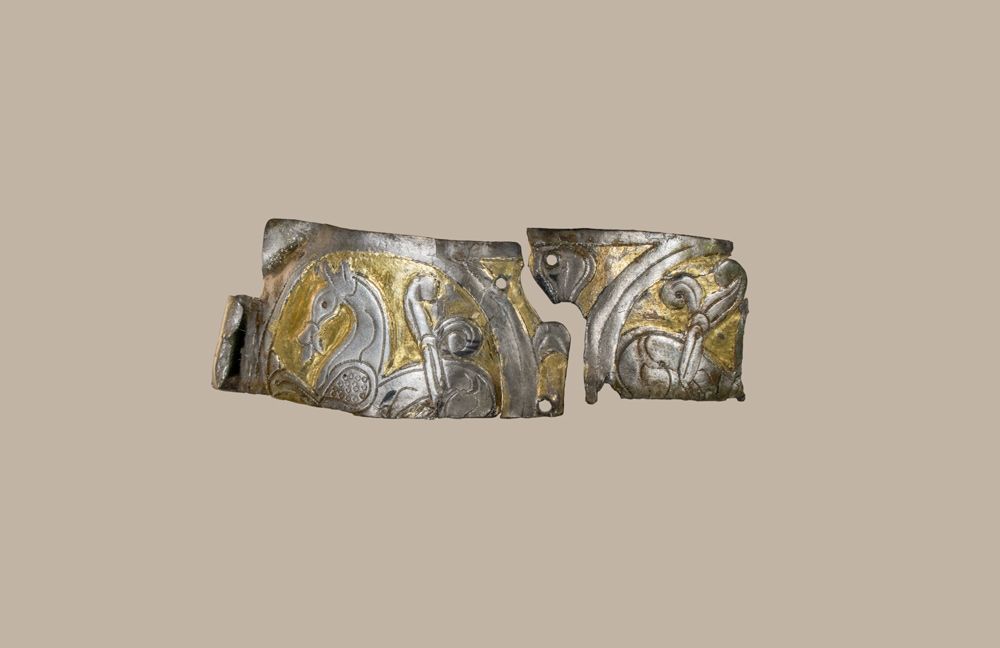 Fragments of the bracelet from the time of the Hungarian conquest in Szarvas were transferred from the collection of the Péter Vajda Grammar School to the Sámuel Tessedik Museum. Its location is unknown, probably during the excavations of the Szarvas teacher Endre Krecsmárik in the 1920s, or after his departure and death in Szarvas, a student could take him to the grammar school between 1930 and 1950. Despite the incompleteness of the fragments, its entire structure can be reconstructed well. The thin silver plate strap was closed on a Byzantine pattern with a hinged member, traces of which can be seen on the fragments. A similar Byzantine bracelet is known intact from the Tiszaeszlár-Bashalmi (Szabolcs-Szatmár-Bereg county) cemetery. He decorated the plate with the goldsmith's punching technique. Its surface shows framed mythical animal figures with plant ornaments growing out of their sides or backs, which can be either the animal's receding tail or even a tree of life symbolizing the rider. The animals alternately face each other and face each other, the round frames enclosing them are also connected by plant ornamentation. The subject is the so-called so-called it belongs to the circle of tarso plates and was presumably made in the pre-conquest times, somewhere around Kiev. The mythical animal figures on the bracelet were defined by Júlia Kovalovszki as a wingless griffin, but it was also suggested that a horse (taltos) formed from plant samples can be seen in the picture.

Roman trapezoidal enamel inlaid enamel (enamel) fibula, discovered during an instrumental excavation related to the archeological observation on June 3, 2020 at the Szarvas-Halásztelek, Sziráczki farm located on the shores of the Great Cape backwater. The find has since been restored. (Finders: Gábor Kelemen and Zsolt Czesznak, photo: Anita Baksáné Bacsu)