Library Exhibition
Bookstore
zengo.theme.szarvasmuzeum::addon.kiallitasok_back
Welcome to the Bookstore. This room will teach you about the history of runiform script and show you two rare artifacts with runic inscriptions on them found in the Szarvas area.

In your travels in Hungary you might have seen that next to the sign that identifies a town there is generally another sign on which the name of the town is written in runic script. But what do we know about these strange notched letters? The boards in the room will show you the history of runic scripts. The Germanic runes, the Turkic runic scripts discovered in Inner Asia and Mongolia, and the Eastern European runiform writings are each covered on a separate board. The runic scripts of the Carpathian Basin belong to the last group in the row and can be organized into three major periods.

The first type was the Avar script which emerged in the Late Avar period in the 8th and 9th centuries. These can be found on the famous gold treasure of Nagyszentmiklós as well. The longest text written in the Avar runic script consists of at least 59 characters and was discovered on the needle case in this room. Unfortunately, the inscription has not yet been completely deciphered, but some signs and deity names have been reliably identified. If another record of a similar size was found, we could come closer to understanding the inscription of the Szarvas needle case. The other two periods of the runiform scripts of the Carpathian Basin are the Hungarian Conquest Period and the age of the Szekler script in the 13th century.

In addition to the two objects showcased, the boards on the wall also deal in detail with the history of runic scripts in general and their other archeological records in the Carpathian Basin.

If you want to delve deeper into learning about runic signs, we suggest you try the runic script games in the room. Remember that runic writing should be read from right to left. 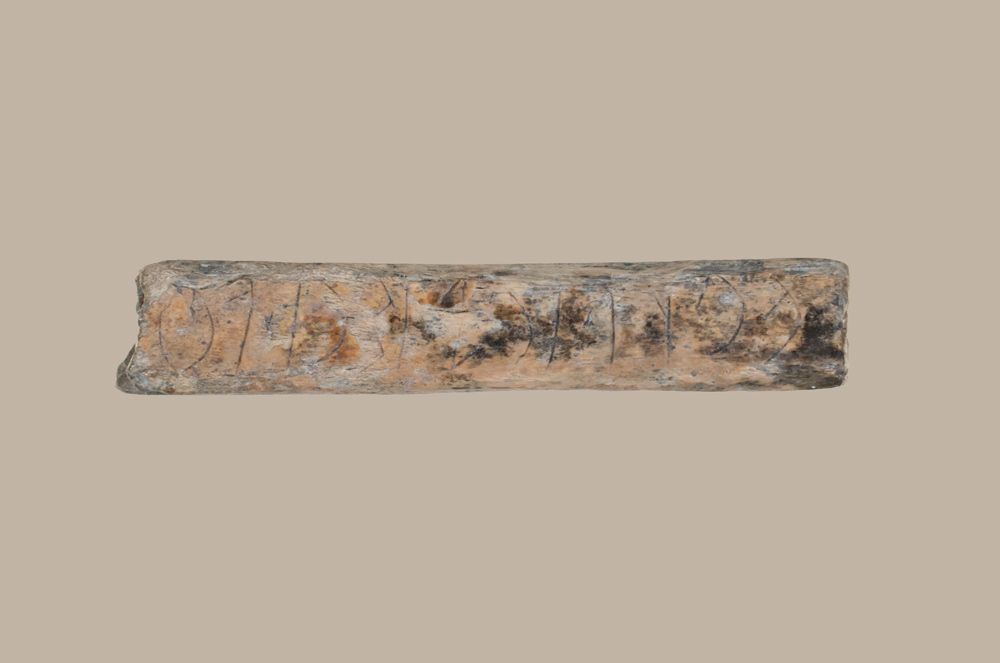 The needle holder was found on April 27, 1983 by Irén Juhász - archaeologist at the Tessedik Samuel Museum in Szarvas - during the excavation of a 460-grave Late Avar cemetery in the area of the former Grexa brick factory east of the city, on the south side of the main road 44. In addition to the needle holder made of sheep bone, another spindle button was found in the female tomb No. 67. The letters of the runic inscription are related to the inscriptions of the famous treasure of Nagyszentmiklós. Since then, several famous researchers have tried to decipher the inscription: András Róna-Tas from Old Turkish, Gábor Vőző from Hungarian, and János Harmatta from partly Turkish and partly Hungarian, but until the discovery of new, larger contemporary texts, the Szarvas needle holder still keeps the secret.

At the Szarvas-Rózsás-mound site, the rescue was carried out in several stages, respectively

a late Avar tomb in which the bones of an elderly man and his equipment were unearthed (buckle,

during its preparation, he noticed the cast bronze large belt end on one of the narrow longitudinal sides

runic marks are incised, from which 12-14 marks can be determined. The end of the big belt itself is cast bronze,

connected to the strap. A beaded pattern runs along its flanged sides. To the lily strap ends

Based on our knowledge of the site, the find may have been buried sometime in the first decades of the 9th century, so