Triangular headed idol
Triangular idol
zengo.theme.szarvasmuzeum::addon.kiallitasok_back
Welcome to the room of the triangle-headed idol. You can see the 7,000-year-old statue which has become the emblem of our museum. In this room, you can learn a lot of interesting things about this figure and the people who made it.

In this period, farming techniques continued to develop so that more and more food could be produced. Thanks to the abundant food supplies, the population also grew, and their lifestyle also changed with this growth. The first villages appeared because tribal communities no longer needed to migrate and could thus live in one place for many decades. New houses were built where the old houses had been demolished, and over the centuries, residential hills called tells rose out of the plain landscape.

Archeologists have observed a characteristic decorative style on the ceramics made in the era – this linear decoration can be found all over the Great Hungarian Plain, which we call the Alföld, so the  culture of this group of people was called the Alföld Linear Pottery Culture. Some of the culture’s more advanced branches survived for a very long time in this region. The group maintained commercial relationships with neighboring peoples, and they may even have invented writing.

This triangle-headed idol in the center of the room is one of the largest human-shaped works from that era. The pattern on its flat square body resembles the weaving of clothing. Based on its triangular head, it probably depicts a god wearing a mask. The holes in his shoulders were probably used to hang it up on the wall in a central location of the house to aid in performing various rituals. These sculptures were believed to provide the power of fertility for worshippers.

In the showcases around the idol, you can examine other objects and pots made in the Alföld Linear Pottery Culture period.

You can also watch a video on how farming emerged in the region and how people’s cults were related to fertility. You can observe how much the homes of the time were similar to today's houses.

By browsing through the four boards on the walls, you can also observe the daily life of a Neolithic man and woman. 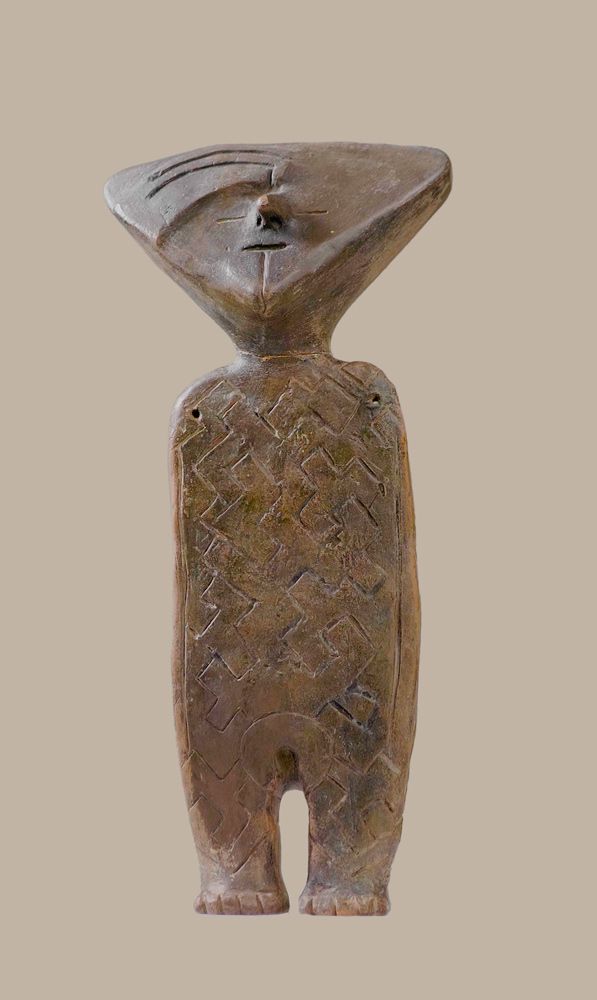 The discovery of idol János Makkay in 1977-78 was during the demolition of a House of The New Stone Age, north of Szarvas, in a site called the Mill-Zug Canal. In terms of size, it is the largest central Neolite idol in Hungary. The head of the statue was slapping back, triangular, the face with a plastic, pointed nose, while the nose was marked with a dot that poked in the mouth. Its body is flat, brick-shaped, and the scratched geometric decorations symbolize the pattern of woven dresses. Based on the flat, triangular face shape, it is believed to depict a deity wearing a mask. The arm and legs were lengthened, drilled across the shoulder, which, with a string thread, could serve as a suspension.